Post-talk show, the couple is heading to Africa for the June opening ceremony of the Ellen DeGeneres Campus of the Dian Fossey Gorilla Fund: “I think about moving there,” says the former host. By Kathryn Romeyn 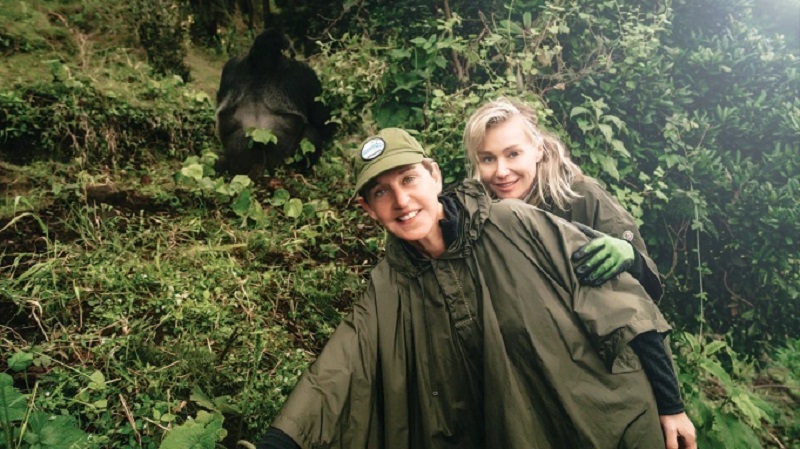 Ellen DeGeneres may have just wrapped her last gig of 19 years — the final episode of The Ellen DeGeneres Show aired May 26 — but she’s already making moves for the future.

That’s thanks to wife Portia de Rossi, who came up with the ultimate gift four years ago when the host turned 60: the multi-acre Ellen DeGeneres Campus of the Dian Fossey Gorilla Fund (DFGF), just outside Rwanda’s Volcanoes National Park.

The vision: « To continue her legacy and her work and add my name to hers, which is probably the coolest thing that will ever happen to me, » says DeGeneres, who has been fascinated with the late primatologist and conservationist since she was a 12-year-old reading her parents’ National Geographic, which featured Fossey holding a baby gorilla on its cover in 1970. “This brave, amazing, trailblazing woman living on a mountain by herself with these massive, wild creatures,” DeGeneres describes, still in awe. « It became a dream to go to Rwanda and see them in person. » 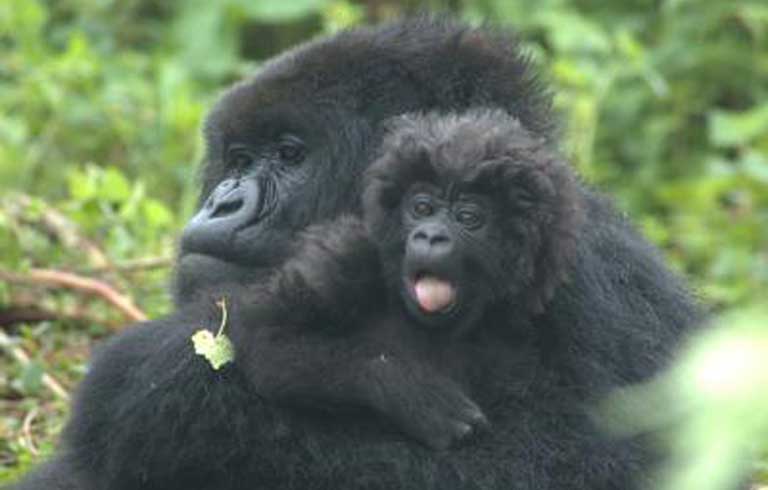 De Rossi learned this early in their relationship, and « it stuck with me, because over the years Ellen has met the most amazing people on earth, really, yet the person who had the greatest impact on her was someone she never met, Dian Fossey. » For that milestone birthday in 2018, de Rossi says, « I didn’t want to get her another watch. I knew the show was ending, and I wanted her to be engaged in something else she loved, plus I wanted her to remember what was important to her when she was a kid. »

She called DFGF and literally asked whether it needed anything. « The CEO, Tara Stoinski, was pretty overwhelmed, » recalls de Rossi. « She said, ‘We were just looking at pieces of land to build a new campus.’ Does that sound interesting to you?’ And I said, ‘Nothing could be better.’ »

Fast-forward to February 2022, when the campus — designed by sustainably minded architecture firm MASS Design Group — opened to the public. It offers immersive and educational experiences, such as watching mountain gorillas on film in the 360-degree Irmelin DiCaprio Theater, « which is really very overwhelmingly beautiful, » says de Rossi. Visitors also can engage with augmented and virtual reality, artifacts and a reproduction of how Fossey lived in her little hut, complete with original notations and desk. When they first visited in 2018, DeGeneres says, « I met people who had worked with Dian, and I sat at her desk and of course wept because it was the most moving thing to sit where she sat and worked. »

The campus so far has seen about 5,000 visitors, two-fifths who have been Rwandan students. The hope, says de Rossi, is that the next generation of conservationists in the country are « [Rwandans] rather than folks from other countries. » Adds DeGeneres, « It’s not long before we lose a bunch of other species if we don’t protect their habitats.» 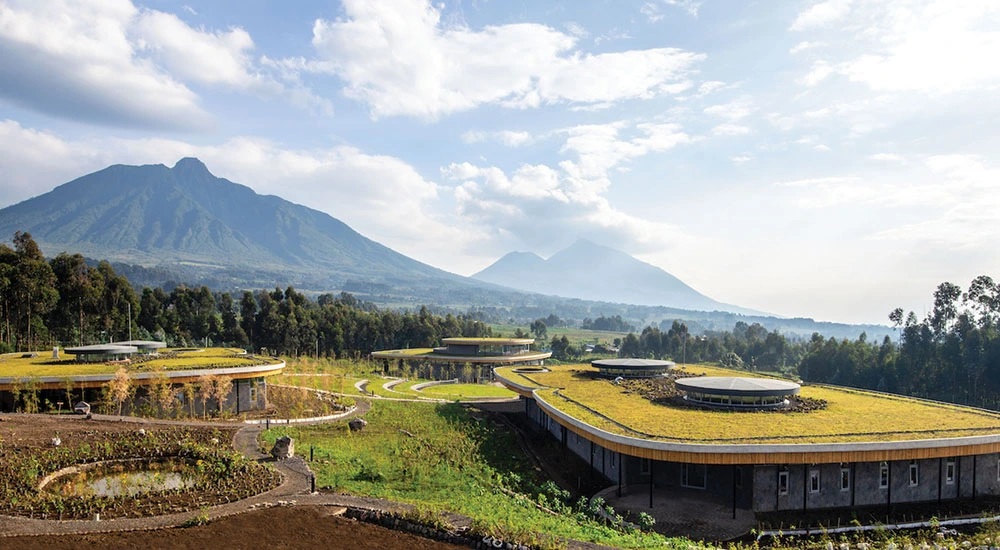 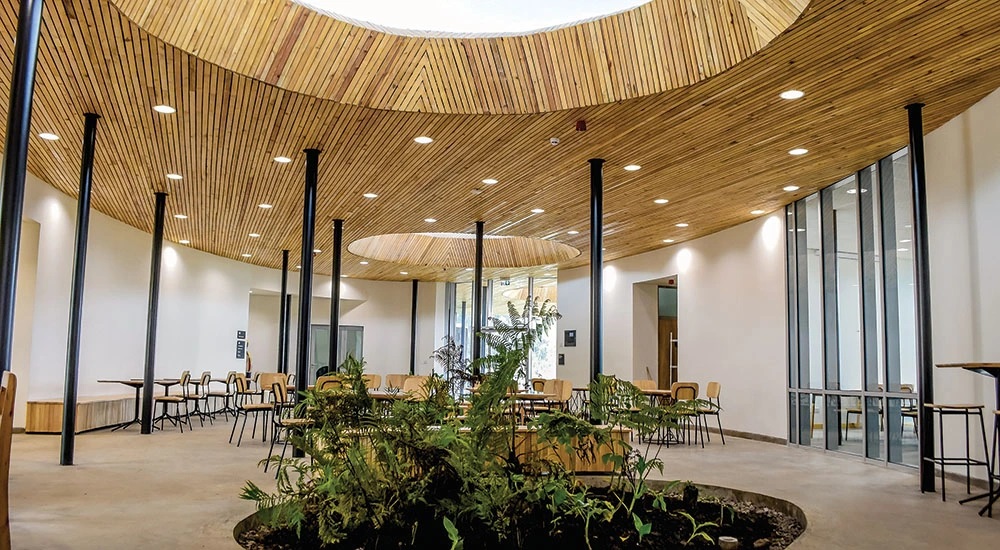 A meeting space. Says DeGeneres of her passion for gorilla conservation, « They could snap you in two, but they’re these gentle creatures, and that’s what Dian showed everybody. » MARY H. HOLDER/COURTESY OF FOSSEY FUND

The couple’s nonprofit, The Ellen Fund, made the lead gift for the campus, and the duo held a 2019 fundraiser called Gorillapalooza. « We invited all our pals, Leo [DiCaprio] being one of them, and they were all so incredibly generous, » says de Rossi. The event auctioned off buildings, including the theater named for DiCaprio’s mother, and a computer lab in his father George’s name, raising $5 million. « When Portia gave me this gift, there were 800 gorillas, » says DeGeneres, « and today there are around 1,100. So it’s really made a difference, bringing awareness. » Her own firsthand experiences gorilla trekking « reaffirmed everything that I had always wanted to do when I was a kid. Being next to them is life-changing, » she says.

« They don’t want to hurt you and yet they could snap you in two, but they’re these gentle creatures and that’s what Dian showed everybody, » continues DeGeneres. « People were treating them like monsters when it was the humans that were the monsters, killing and poaching them. Gorillas are so, so like us. When they’re next to you, in person, you see their family dynamic. They’re just amazing, beautiful creatures. » (Gorilla trekking permits are $1,500 per person, with operators such as Go2Africa offering enriched experiences, such as gorilla treks with DFGF researchers, silverback sundowner experiences and a private gorilla conservation master class, all while contributing to conservation funds. Nearby accommodations include the the show-stopping nest-like Bisate Lodge, the uber-private One & Only Gorilla’s Nest, and the ultra-luxe and ultra-sustainable Singita Kwitonda Lodge.)

De Rossi attended the 2019 groundbreaking, and they’ll both return for a June 7 opening ceremony. « I can’t wait to see Ellen’s reaction. When we’re actually there in the flesh walking around the buildings I think she’s going to be super emotional, » says the actress. Though transformed by their intimate, exhilarating peeks into our primate cousins’ lives, DeGeneres says, « It really became more than just about the gorillas, it became my love for the people of the country. »

Just as de Rossi intended, neither the gift nor their presence is finite. « I think about moving there, » says DeGeneres of the country. « We think about getting a house there and spending a lot of time in Rwanda because the people are so beautiful and happy and welcoming.»

This story first appeared in the May 25 issue of The Hollywood Reporter magazine.