Rwandan President Paul Kagame addressing a joint sitting of the Houses of Parliament yesterday. He wants regions to unite in advancing common interests. By Francis Kimone 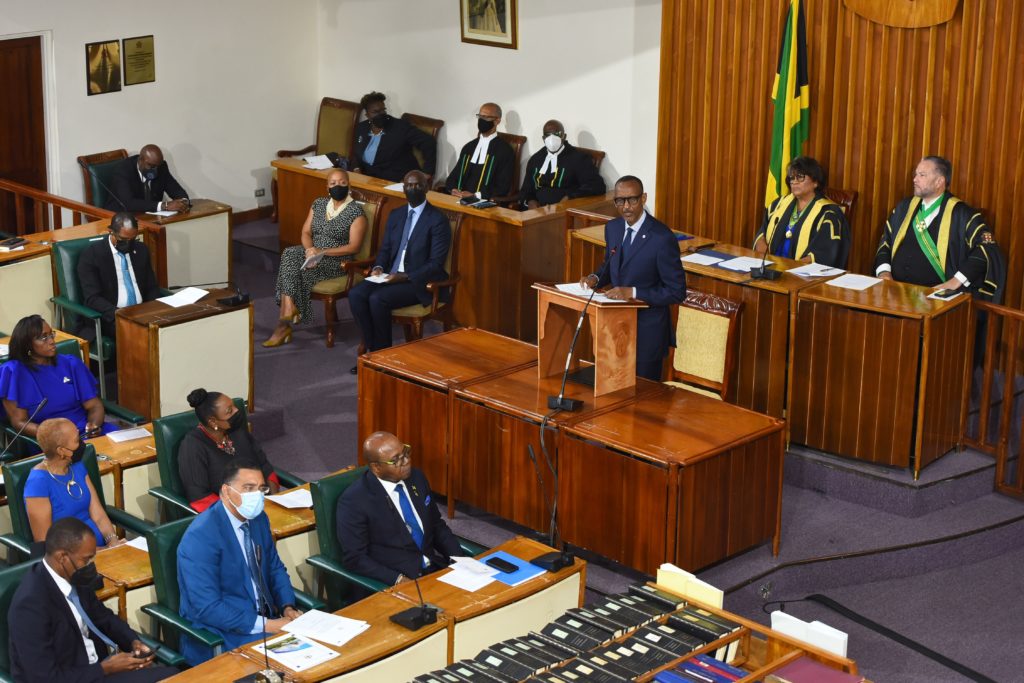 Rwandan President Paul Kagame has called for solidarity among African and Caribbean nations, charging that they must work together to advance their common positions and interests globally.

In an address during a joint sitting of the Houses of Parliament on Thursday, Kagame – who has been hailed for steering Rwanda away from the brink of ruin after taking office in 2000 on the heels of the tumultuous 1990s – said Africa and the Caribbean must open direct lines of communication.

His comment comes just weeks before he takes up duties as the chairman of the Commonwealth, even as there is discord within the Caribbean Community (CARICOM) over who should be elected secretary general in June.

Regional heads of governments remain at odds over whether Jamaica’s Kamina Johnson Smith should replace the incumbent, Baroness Patricia Scotland, a Dominican whose tenure has been marred by controversy over a lucrative consultancy contract awarded to a friend’s company after reportedly circumventing the usual competitive tendering rules.

It was also revealed that procurement rules had been waived in no fewer than 50 instances by the secretariat over three years.

Kagame, who is on a three-day visit to the island, said that the Caribbean is expected to put forward strong representation when the Commonwealth Heads of Government meet in Kigali, Rwanda.

« In our diversity, we share common traits. Our people are resilient, creative and, as our common history shows, also indestructible. This mutual recognition should have practical, tangible effects. We belong to a number of important multilateral bodies, including the Commonwealth and the Organization of African, Caribbean and Pacific States, » Kagame said.

« Africa and the Caribbean should work together to advance common positions in these bodies where our interests align, as they often do. Climate change and global health are two urgent examples. »

The Rwandan president said that the two regions are beyond relating to each other through intermediaries.

« Our diplomats tend to meet in London, New York, or Geneva. I have no problem with that, but we could do it otherwise – directly, » said Kagame.

He said that it is « high time » for Africa and the Caribbean to work together in a « direct and sustained » manner both through representative regional organisations – CARICOM and the African Union – and bilaterally.

He also wants direct people-to-people exchanges, particularly for the youth and entrepreneurs.

« We believe that there is much for us to share and learn from each other. Through our exchanges, we would have had the opportunities to take forward technical cooperation in several fields ... .

« We’re looking forward to advancing our economic relations through increased trading and investment prospects particularly as it relates to logistics, special economic zones agriculture, and manufacturing, » he added.