MIGRATION DEAL: « Rwanda will always welcome those in need of refuge »

The agreement between Rwanda and the United Kingdom of Great Britain and Northern Ireland (UK) is a tale of two approaches. Broadly criticised in the UK as inhumane, it was initiated in Rwanda as a humanitarian response to the global migration crisis. 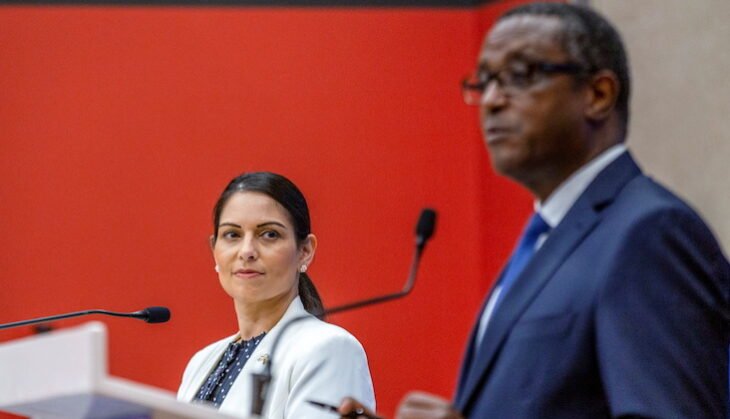 The Rwanda-UK Migration and Economic Development Partnership will see migrants, who entered, or sought to enter the UK illegally, transferred to Rwanda. Once in Rwanda, the arrivals will go through the process of either seeking asylum, or immigration.

Those who do not wish to stay in Rwanda, will be facilitated to either return to their countries of origin, or choose a third country.

Those who choose to remain in Rwanda, will be welcomed into the community, say the government. Rwanda does not have a policy of detention for migrants or refugees. New arrivals will be settled in the community, rather than in camps as has been reported.

« From day 1, migrants will be offered human capital investments, aligned with their capabilities and goals. This includes…skills training, language training, higher education, as well as healthcare and social protection » says the government in a statement. The new arrivals will in effect be invited to become part of the Rwandan community.

The agreement, expected to run for five years initially, is complex and will be costly. It will increase demand on Rwanda’s social infrastructure, and fledgling welfare system. To meet these costs, the UK has agreed fund it to the tune of £120m ($156m).

The funding will be part of Rwanda’s Economic Transformation and Integration Fund, and will benefit both Rwandans and migrants alike.

While the exercise is universally seen almost entirely from the UK perspective, the initiative was in fact an equal partnership between the UK and Rwanda government. Many of its components, primarily the incorporation of the migrants into the community, were initiated by Rwanda.

Underpinning Rwanda’s approach to the agreement is a policy of never turning away anyone seeking refuge. As a people who at one time were the largest contributors of refugees to the world, it is a virtual article of faith that Rwanda will always welcome those in need of refuge.

The country also sees the agreement as not only fulfilling Rwanda’s international obligations, but Africa’s responsibility to respond to the global crisis in migration.

« Addressing the migration challenge is a shared responsibility for Africa, Europe, and the international community. Every young African or migrant from elsewhere, should be able to lead a dignified, productive, and safe life on the African continent », say the government.

The country is now host to around 130,000 refugees from not only from the Great Lakes region, but also from Afghanistan, Libya, and recently displaced Ukrainians. Rwanda gives refugees the automatic right to work, set up businesses, and access to every service available to ordinary Rwandans.

At the press conference announcing the agreement, with Rwanda Foreign Minister, Vincent Biruta, the British Home Secretary, Priti Patel, noted Rwanda’s policy on refugees, as one of Britain’s reasons for entering into the agreement with the country. She was also keen to emphasise that the initiative was a two-way partnership agreement, that should not be seen as the UK simply sending migrants to Rwanda.

« Today, our approach, as two outward looking countries, has led to the signing of a new international partnership, which is a first…a migration and economic development partnership, with the country of Rwanda and UK…This is number one, very much a partnership, and clearly, we engage in dialogue, and we have been for over nine months now. Rwanda has a unique history, in terms of refugees and resettlement, resettlement in particular », says Patel.

« But first and foremost, Rwanda is a safe and secure country, with a respect for the rule of law, and clearly, a range of institutions that have evolved and developed over time. And with that, the skilled way in which Rwanda has already provided resettlement, for almost 130,000 refugees from multiple countries » . The agreement will cover only those migrants who Britain identifies as having entered the country illegally, most of whom are already in detention. Should they not wish to be relocated to Rwanda, they will have all the normal legal avenues to appeal against the transfer. If the appeal fails however, their options will be limited to either being returned to the first safe country in which they landed, or migrating to Rwanda.

While the UK is facing near universal criticism for the agreement, in Rwanda, it is seen as the country’s « commitment to the full social and economic integration of asylum seekers and refugees, who are part of our vision for economic development » according to the ministry of foreign affairs.