Rwanda and the DRCongo have agreed on a ceasefire during face-to-face talks between President Paul Kagame of Rwanda and President Felix Tshisekedi of DRC mediated by President João Lourenço of Angola. 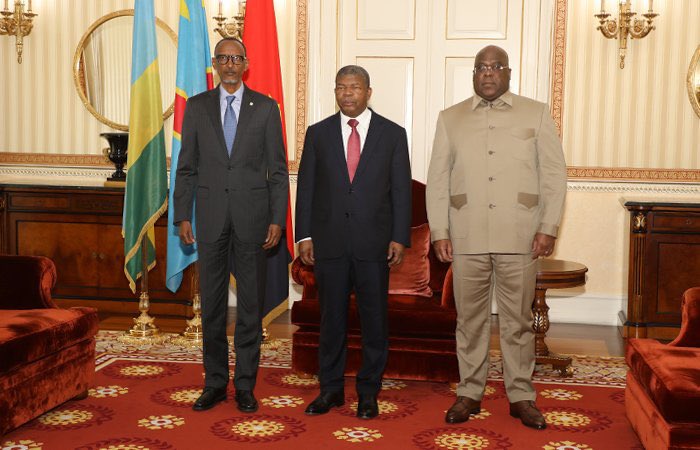 « It is with satisfaction that I must announce that we have had positive results, in our view, insofar as we have agreed a ceasefire, » President João Lourenço told journalists immediately after the talks.

According to the Angolan leader, Rwanda and DRC presidents have agreed on a roadmap which includes among others, creating a mechanism for Ad Hoc observation, in addition to the one existing at the level of the International Conference of the Great Lakes Region.

This Ad Hoc mechanism, according to President Lourenço, will be headed by a Military General of the Angolan army.

« We have agreed to hold a meeting of the Joint Commission between the two countries – which met for the last time a long time ago in the city of Kigali – and which should meet when the environment is favourable for such, in the city of Kinshasa, » He added.

However, as a way of restoring the lost trust between the two countries, this first meeting of the Joint Commission between the DRC and Rwanda will be held in Luanda, next Tuesday, July 12th.

Meanwhile, this tripartite meeting the leaders agreed that Kigali and Kinshasa resume normal diplomatic relations. They also agreed on « immediate and unconditional withdrawal » of the M23 rebel group from its positions in eastern Congo.

However, by Wednesday the M23 rebels had captured a strategic town Rutshuru almost 40 kms away from the Provincial capital Goma a stone throw away from Rwanda. It remains unclear whether the M23 rebels would retreat out of most parts they have so far seized.

Rwanda also accuses the Kinshasa regime of supporting and embedding the FDLR rebels into FARDC structures- they are largely composed of perpetrators of the 1994 genocide against Tutsi.