Rwandan President Paul Kagame accused his Congolese counterpart of ignoring the « real issues » threatening relations between the neighboring countries including the failure to quash internal rebellion, as fears mount of a new war in the Great Lakes region. By Bloomberg 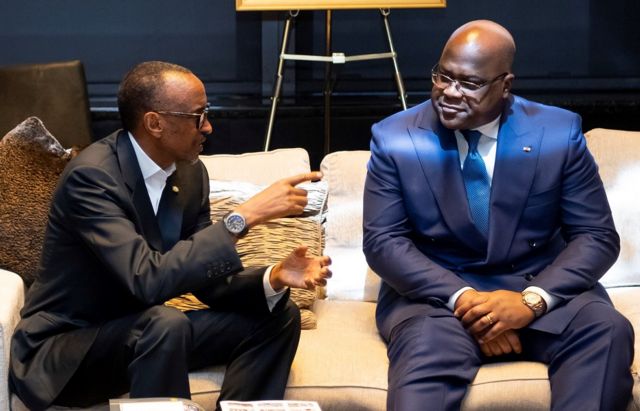 Kagame and the Democratic Republic of Congo President Felix Tshisekedi have over the past weeks blamed each other for stirring conflict. Tshisekedi said Kagame is backing rebels against his government. Rwanda denies the allegation and has warned Congo against firing into its territory under the guise of going after insurgents.

« Making those accusations is simply running away from his responsibilities as the president of that country, » Kagame said in an interview with Zain Verjee, a host at the Qatar Economic Forum, Powered by Bloomberg.

Kagame was referring to an inability to deal with militant groups in eastern Congo, a threat successive Congolese administrations and the United Nations have failed to tackle for two decades. One is the Democratic Forces for the Liberation of Rwanda, or FDLR, which Rwanda has linked to the 1994 genocide and Kagame wants to destroy. Another is known as M23, which says it aims to protect people of Rwandan heritage from mistreatment in Congo, but stands accused by Tshisekedi of opposing his government with Kagame’s backing.

« The Congolese of Rwandan ethnicity and how that issue has been handled in the Congo needs more attention, » Kagame said. « It can be addressed. If you look at the rights of people, fixing their problem is a simple matter. »

A spokesman for Congo’s presidency didn’t immediately respond to messages seeking comment. Tshisekedi said in a speech to his council of ministers on Friday that his country « is facing an attack by Rwanda, under the cover of M23. »

A Congolese soldier who crossed into Rwanda was killed on Friday after allegedly shooting at security personnel and civilians. The incident ensued after an increase in M23 activity in Congo, including the seizure of Bunagana town near the intersection of the DRC, Uganda and Rwanda.

M23 now plans to capture the trading hub of Goma on the Congo-Rwanda border, according to a report by the UN independent group of experts. On June 10, Rwanda said the Congolese army fired two rockets into its territory.

The tensions evoke memories of the so-called African World War, which erupted when Rwanda and Uganda invaded Congo in 1998 after they fell out with Congolese then-president, Laurent Desire Kabila, who they’d helped oust Mobutu Sese Seko. The conflict pulled in several other African nations and dozens of militant groups, leaving millions of people dead.

Congo is the world’s largest supplier of the key battery mineral, cobalt, and one of the biggest copper producers.

Congo may be forced to negotiate with M23 if Goma falls, and the rebels may submit demands for amnesty, the restoration of their assets and the integration of its fighters into the army, according to the UN experts’ report released June 17. The M23 is largely made up of Congolese Tutsi, the same ethnic group that bore the brunt of the 1994 genocide. The perpetrators were mostly Hutus, some of whom fled to Congo and formed the FDLR.

Initiatives are under way to try to resolve the dispute. Angolan President Joao Lourenco is involved as the chairman of the International Conference of the Great Lakes region, as is Uhuru Kenyatta, Kenya’s president and chairman of the East African community. The EAC plans to deploy a regional force into eastern Congo.

The leaders are set to meet on Monday for further talks, according to Kagame.

« It’s not that we haven’t been addressing the the right issues » but when it comes to « implementation and, for some reasons I don’t understand, President Tshisekedi has chosen a completely different direction, » Kagame said. « We need to attend to the real issues. » 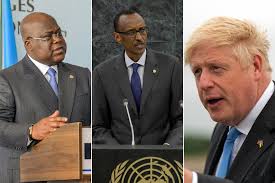 Calling Belgian King or PM Boris Johnson for manipulated business, show that Tshisekedi do not know how Kagame and Rwanda are independente

Tshisekedi has also urged UK Prime Minister Boris Johnson who is pushing for a controversial $150 million deal to send asylum seekers who cross the English Channel to Rwanda, to intervene. Kagame is hosting the Commonwealth Heads of Government Meeting in Kigali this week, where Johnson and Prince Charles are expected to attend.

« The arrangement with UK is connected to that experience, » he said. « The global asylum system is broken and needs innovative solutions. We are happy to be part of contributing to those solutions. »

The full interview with Kagame will be broadcast at the QEF conference on Tuesday. Qatar’s Ministry of Commerce and Industry, Qatar Investment Authority and Investment Promotion Agency Qatar are the underwriters of the Qatar Economic Forum, Powered by Bloomberg. Media City Qatar is the host organization.