There was nothing unusual about Nigerian Archbishop Henry Ndukuba leading the 2021 dedication rites for Holy Trinity Cathedral Church, which was packed with Nigerian Anglicans and a dozen or so bishops. By Terry Mattingly 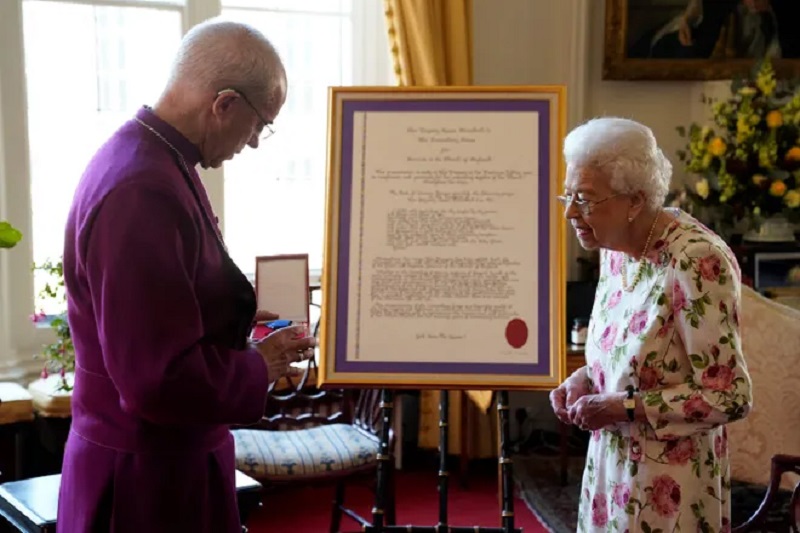 In the first photo glimpse of Queen Elizabeth II since her Platinum Jubilee in early June, the queen received Archbishop of Canterbury Justin Welby at Windsor Castle on June 21, 2022. He gave her a special “Canterbury Cross” for her service to the Church of England over her 70-year reign; the citation was presented as a framed piece of calligraphy. Andrew Matthews

But this historic service was in Houston, and the cathedral is not part of the Diocese of Texas or the U.S. Episcopal Church. Some clergy at this Church of Nigeria North American Mission event were recognized as Anglicans by the Archbishop of Canterbury. Some were not.

This puzzle became more complicated recently during Lambeth 2022, which Nigeria boycotted along with the Churches of Uganda and Rwanda. Other Global South bishops during Lambeth standoffs with Archbishop of Canterbury Justin Welby over the status of doctrines on marriage and sex declined to receive Holy Communion with openly gay and lesbian bishops.

« There is a profound asymmetric quality to the Anglican Communion, where the voice of the bulk of its membership is either absent or muted, » said the Rev. David Goodhew of St. Barnabas Church in Middlesborough, England. He is the author of a series of articles about African Anglicanism for Covenant, the blog of « The Living Church, » an independent Anglican publication founded in 1878.

« If one adds up the number of bishops who didn’t share Holy Communion at Lambeth … that is a very large number, » he said. « I have been startled by the number of descriptions that said this Lambeth was a success. I don’t know how one makes that claim when it would appear the bulk of the Anglican Communion’s bishops couldn’t come together to receive Communion. That looks like a disaster. »

Bottom line: Global South Anglicans are experiencing a « volcano of growth » and remain« « at loggerheads » with the shrinking churches of the United Kingdom, North America and other Western nations. While most Global South bishops serve growing flocks – roughly 75% of active worshippers in the 77 million-member Anglican Communion – many Western bishops lead what Goodhew called « micro-dioceses » with fewer than 1,000 active members or « mini-dioceses » with fewer than 5,000.

The Church of Nigeria, meanwhile, claims 17 million members and the Center for Global Christianity at Gordon-Conwell Seminary, near Boston, estimates active participants at 22 million. The other churches skipping Lambeth 2022 were Uganda, with 10 million members, and Rwanda, with 1 million members.

Lambeth officials said 650 bishops attended, but Canterbury declined to release a list of participants – making it impossible to compare the number of Western bishops with those from the Global South, many of whom struggled to obtain visas due to lingering travel complications.

In a Covenant essay – « Lambeth 2022: Is White Privilege Making the Calls? » – Goodhew dared Anglicans to ponder the growing doctrinal and financial tensions between the Global South and the colonial powers that once sent them missionaries.

« Yes, a bishop’s episcopal charism does not depend on the number of worshippers in their see. But when almost all the micro-dioceses are in the west, and when western bishops are disproportionately present at Lambeth 2022, this is white privilege in action, » he wrote. « Lambeth 2022 is taking place even though the bishops of half of African Anglicans have refused to come. Their dioceses constitute a third of the total Anglican Communion. Western bishops may say ’it was their choice not to come.’ But this is not a good look. »

Thus, he argued: « The Anglican Communion has created the equivalent of the ’rotten boroughs’ of 18th-century England, where tiny numbers of electors could send people to parliament, whilst millions were disenfranchised. In Anglicanism, every bishop is equal – but some are much more equal than others. »

One question looms: What about Lambeth 2032?

« The elephant in the room is just going to get bigger, » said Goodhew. « There, obviously, are a significant number of Western dioceses which are not of meaningful size. The probability is that in 10 years’ time that number is going to be larger, quite possibly a lot larger. …

« It’s quite possible the structures of Anglicanism will look quite different by then. It’s a sign of madness to carry on doing the same thing, while expecting to get different results. »