Amitra Wall, Buffalo State College’s associate provost, has been a longtime supporter of the Anne Frank Project (AFP) and its social justice mission, which has included yearly trips to Rwanda. By Laurie Kaiser 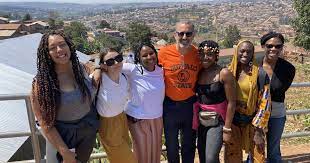 This summer, Wall had the opportunity to delve into the immersive Rwanda experience during a two-week trip in July. She and a small group of Buffalo State staff and alumni visited genocide memorials and conducted story-based training with Rwanda schoolteachers and reconciliation facilitators.

« It was a humbling experience, » Wall said. « What was remarkable was the sincere forgiveness and the desire for reconciliation we saw in the families of the victims and in the perpetrators. Rwanda is no longer made up of the Tutsis, Hutus, and Twa. Rwanda is full of Rwandans who have great pride in their nation. »

During the 1994 genocide against the Tutsis, ethnic Hutu extremists slaughtered more than 1 million people in this east African country in a span of just 100 days.

« We met a man who shared that he killed five members of a woman’s family, » Wall said. « The woman was sitting next to him as he relayed the steps that he took to get to the point of forgiveness. It was incredible to walk through the reconciliation villages to see the children of perpetrators and victims playing together and the adults talking and working alongside one another. »

She added that the reconciliation villages and more than 200 memorials are powerful symbols of a nation seeking healing. 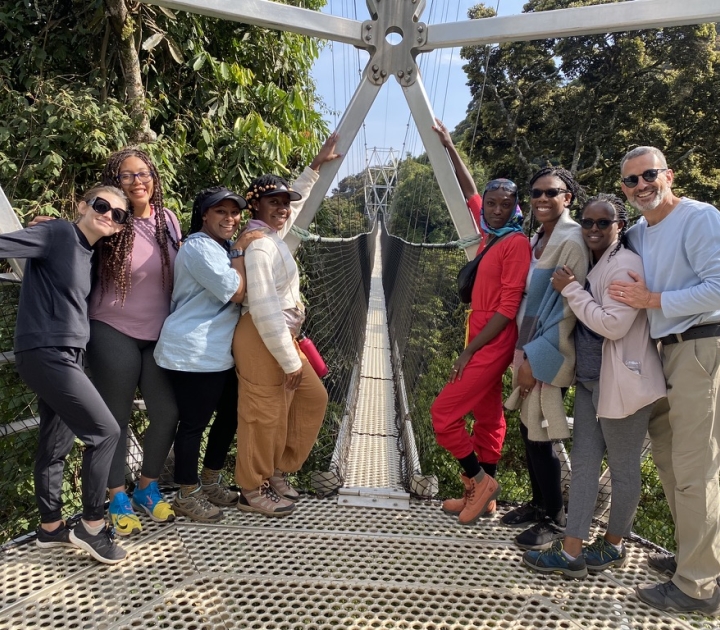 Rwandan visitors a pose on a bridge

« I wanted to look at examples of how people and nations persevere. Rwanda’s approach of speaking about tragedy with the expectation of moving forward is an example that we need to consider. »

Wall also shared the story of a woman who was an 11-year-old girl during the genocide. While trying to escape, she saw a young mother dying in the street. The woman had a baby at her breast and begged the girl to take the baby so that she might survive. That baby is now a young woman who participated in the reconciliation exercises with the Buffalo State visitors.

« These are the kinds of stories that epitomize social justice, the heart of the Anne Frank Project, and the essence of Buffalo State’s commitment to justice, equity, diversity, and inclusion [JEDI], » said Drew Kahn, SUNY Distinguished Service Professor and AFP founding director, who has led yearly pilgrimages to Rwanda since 2011.

In previous trips, a cadre of students and staff typically worked with schoolteachers on conflict resolution, community building, and identity exploration through story-based education. The students then created a play based on their experience that they perform on campus during the fall AFP festival.

The Rwanda trip was put on hiatus for the past two years because of the coronavirus pandemic. This year, Kahn said, they decided to make it primarily a professional development trip. Along with Wall, the delegation included three recently hired AFP staff members—Jonise Hall, ’20; Gabriella McKinley, ’21; and Roselynn Corrado ’20—and two other alumni, Zhanna Reed, ’19, and Amanda Rojo, ’16, who were both involved with the Anne Frank Project as undergraduates. Rojo, now a graduate student at the University at Buffalo, is Wall’s daughter.

« We hit the ground running, » Kahn said. « We trained over 100 Rwanda teachers and reconciliation facilitators, established important partnerships with two new national organizations [the Kigali Genocide Memorial Center-Peace School and Prison Fellowship Rwanda] and, of course, immersed ourselves in Rwanda’s past, present, and future.»

The trip was made possible, in part, by a $1 million endowed gift Donn Youngstrom gave to AFP in 2021. Youngstrom served in the Theater Department for 24 years until his retirement in 2018.

The funds have enabled the college to hire staff to assist with the AFP in the Schools initiative as well as support keynote speakers for the social justice festival, develop a new AFP Global Learning Lab on campus, and cover travel expenses to Rwanda, as needed.

As a professor of sociology, Wall said, she viewed the trip to the African country through a sociologist’s lens.

« I wanted to look at examples of how people and nations persevere, » she said, especially in light of recent of events that have divided the United States. « I love my country, but we don’t always get it right. Rwanda’s approach of speaking about tragedy with the expectation of moving forward is an example that we need to consider. »